“Like paint applied in semi-transparent glazes, poetry moves through layers of meaning. Word-play and odd digressions lead to thrilling discoveries.”

Q: Your title and the section headers reference a little-known painter and art conservator, Jacques Maroger. Is the book about him? 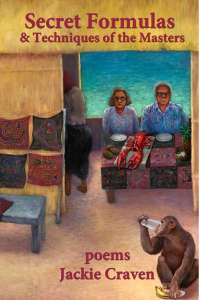 A: Secret Formulas & Techniques of the Masters opens in the 1950s when the art world swirled with excitement over Maroger’s theories. He claimed that he had rediscovered paint mediums used centuries ago to achieve trompe l’oeil (“fool the eye”) effects. The poems in Secret Formulas are not directly about Maroger, but his longing for a magical secret potion bubbles beneath the surface.

Q: There’s a tendency for readers to assume poetry is autobiographical. Are your poems based on “real life”?

A: My mother really did paint the works described in Secret Formulas. She brewed potent and highly toxic paint formulas on our kitchen stove. I really do have a synesthetic sister who associates words with colors. And, my elderly stepfather suffered cognitive problems just like the ones chronicled in several of the poems. Yet, although rooted in factual details, most of the collection dwells in the realm of fantasy. Secret Formulas is a fictional book about true emotions.

Q: Many of the poems, especially in the second section, describe drinking and alcohol abuse. How do these themes relate to the poems about art?

A: Secret Formulas explores the secrets we keep from each other—and from ourselves. The narrator wants to unravel family mysteries and to understand her mother’s strange paintings. But as she views the artworks, the distinction between fact and illusion blurs. Art and alcohol both create a surreal world where perception is unreliable.

Q: Did the poems surprise you during the writing of them?

A: Oh, yes! Like paint applied in semi-transparent glazes, poetry moves through layers of meaning. Word- play and odd digressions lead to thrilling discoveries. Imagine my astonishment when characters in my mother’s paintings began to speak. One of the characters, a monkey who wore my mother’s eyes, became a whimsical muse, telling me how to find hidden meanings: Approach life like a banana. Pinch a corner. Peel. 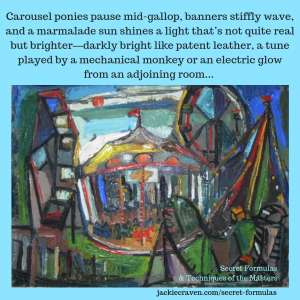 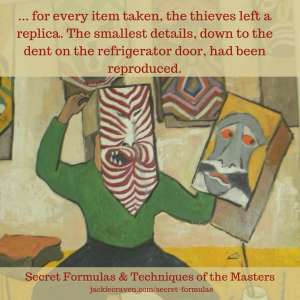 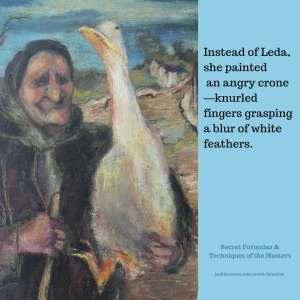