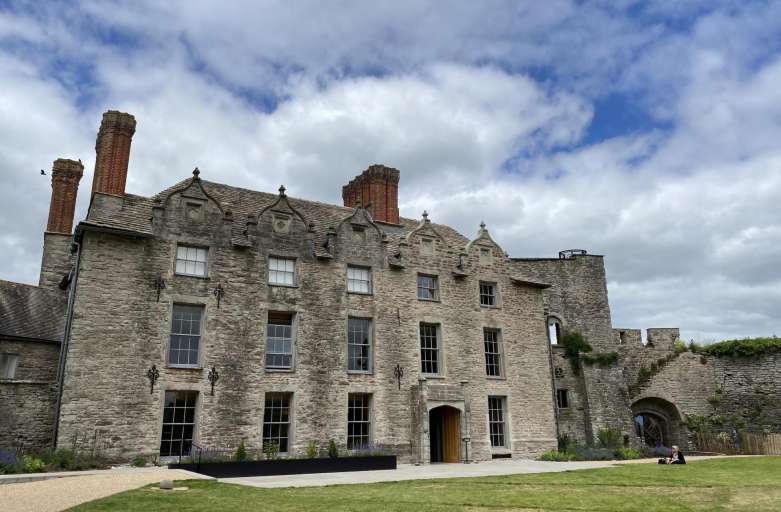 Next time you visit Wales, be sure to stroll by Hay Castle, the one-time home of Richard Booth (1938-2019), self-proclaimed King of Hay-on-Wye. His title was well-earned.

Thanks to the eccentric British bibliophile, the sleepy Welsh village of Hay-on-Wye became a world-famous literary center and the site of the famous Hay Festival held every spring in Wales and various times of the year in a dozen other countries, from Nigeria to Bangladesh.

The transformation of Hay-on-Wye began with the town fortress. Originally constructed in the 1100s, the structure was built, destroyed, and rebuilt many times over the centuries. In the 1600s, a grand Jacobean home was constructed alongside the medieval fortifications. A fire gutted the castle in 1939. Booth purchased it in the early 1960s and opened a used bookstore in the old firehouse nearby.

“I could buy the whole town for six quid back then,” Booth told me shortly before he died.

Despite its romantic appeal, Hay Castle had problems. It was, Booth said, “a wreck of a place” with a crumbling thirteenth century tower, a ruined roof, and the derelict Jacobean mansion.

From the Ruins, a Kingdom for Books

Meanwhile, Richard Booth earned his own notoriety by proposing that the town secede from the country. Donning a crown, he declared himself king—and named his horse prime minister. Was the bookseller daft? Not at all. Richard Booth’s theatrical proclamations were all about dogged planning and shrewd niche marketing.

“We try not to sell new books,” Booth said. He scorned Johnny-come-lately booksellers who dealt in pop novelists like Jackie Collins. “We want you to come to buy something you cannot get anywhere else.”

Ornithology, pornography, outrageous political treatises, manuals for obsolete electrical devices, spiritualist esoterica, Hollywood memorabilia… They all find their way to the book village on the shore of the River Wye. But  never mind the breathy exclamations of tour guides.  Hay-on-Wye isn’t just about books. The kingdom of Richard Booth is the wide and wacky world of secondhandom. “Anyone who would buy a new book is crazy!” he said.

In 1978, another fire swept through the property, gutting Booth’s living quarters. When I visited, the old Norman tower looked about to topple. To finance restorations and save the Castle, Booth played the role of king and treated visitors with royal privileges… for a price. For less than a hundred pounds, anyone could purchase a royal title—baron, duke, earl, knight, or countess.

The property sold to the Hay Castle Trust in 2011, and now the old castle receives support from various sources, including the National Lottery Heritage Fund. Serving as an arts and cultural center, Hay Castle opened to the public in May 2022.

This story originally appeared in the Providence Sunday Journal .

Wales Awakens the Wizard Within

The Tao of Taos