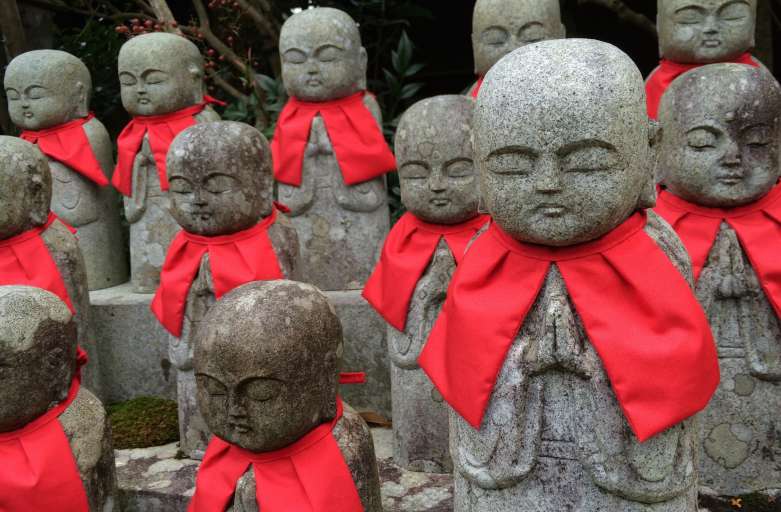 One summer, before the earthquake-tsunami-nuclear crisis, I think I saw Japan. I traveled the country on a motorcoach with 30 other Americans, mostly art students and their spouses and children. We were an odd mix…

Agnes, a retired teacher, lugged brightly colored geometric forms so she could photograph the Nihonji Daibutsu inside an immense red circle.

Cindi, a  sophomore, played Taiko drums on her iPod as she cruised through the Kiyomizu Temple.

Melvin, a long-legged, sour-faced man, shuffled through the Todai-ji Temple at the heels of his patient, adoring wife.

Because he was an Agatha Christie addict, Melvin often stayed behind to finish a particularly suspenseful chapter rather than look at one more wooden god.

“What are you reading?” I asked as we rode Japan’s famous bullet train to Osaka.

Scowling over the rim of his book, he growled, “Murder on the Orient Express.”

He meant well. We all did. Armed with cameras, guide books, and preconceptions, we made a determined effort to visit every one of Japan’s top-rated attractions. Yet what’s remarkable isn’t what we saw so much as what we failed to see.

Jane was a commercial artist who had read extensively about Japan before embarking on this trip. One July night, we wore sundresses to an elegant roof-top restaurant. While we ate pork Teriyaki, the night fell around our shoulders like a shawl. A week later our tour guide informed us, “In Japan, the bare shoulder is considered very… how do you say? Provocative.”

But we didn’t know that yet. Oblivious to the stares our shoulders drew, we leaned back in our patio chairs and lapsed into metaphysical ruminations.

How remarkable, we said, that after only one week, the sounds of the Japanese language had formed patterns in our minds. Why, we could almost understand the words. And the shape of the writing seemed so familiar, we felt we could almost read it, and we would have, if we only had a little more time. And what was time, we asked, but an artificial dimension, like the distance people think they see in mirrors.

These heavy thoughts sank like drops of oil in our minds. We slipped into silence and watched the lights of Kyoto flicker on. Japan was fully comprehensible to us; we had a penetrating, instinctive affinity for water colors, cherry blossoms, and bamboo flutes.

From the next table, a slender Japanese businessman eyed us shyly. His companion, a round and beaming man with bright gold teeth, ordered us beer. Jane gestured for both men to join us. She got the quiet and dignified one; I got the gold teeth.

I fumbled through my English-Japanese dictionary, but before I could find a suitable response, he said, “Car downstairs, you go for ride?”

I shook my head, but the gold-toothed man repeated, “Car downstairs, we show you Kyoto, yes?”

“Car downstairs, you go for ride?”

As his hand brushed my thigh, I fumbled through my dictionary for “No thank you,” but all I could find was “kekko desu,” which means something like “I’ve had plenty.”

Martha lived in a small town, but she had been to most every country that was a country and knew how to recognize deception. Ambling through the Ginza section of Tokyo one evening, we perused the lighted windows of “noodle shops” that held plastic replicas of the food sold inside.

An American need only step in, point, and say, “Kore o kudasai” and he or she would receive his or her desire. Martha, however, gave her order in English. “They can speak English as good as you and me,” she said. “They just don’t want to.”

The waiter brought us soup thick with noodles, chunks of mean, and hard boiled pigeon eggs.  We slurped and splashed and paddled with our chopsticks until he bowed and offered us a “forku.”

The night was so clear and balmy that we decided to walk to our hotel, and we promptly got lost in a maze of neon alleyways.

The Japanese class I had taken taught me how to ask all kinds of questions. Unfortunately, it didn’t teach me how to understand the answers. I shook my head helplessly as the young men rattled off directions. They walked us to the corner and pointed.

“Did you hear what they said?” Martha demanded as we made our way to our hotel. “They said, Disgusting, heh?”

“No, they said desuka. That’s Japanese for what or which.”

But Martha had made up her mind. “Everyone says the Japanese are so gracious, but I think it’s just a put on.”

“You don’t think the Japanese are gracious?”

Another member of our group, Ali, came from California. Raised on sunshine and sushi, she called Japan her destiny.

Ali was a film major who preferred chopsticks to forks and raw fish to cooked. With definite ideas on what and how to eat, she led me to the Roppongi district of Tokyo, where young people mob narrow streets, music blasts from basement rooms, and sushi is served California style. We ate tekimaki (paper-thin seaweed wrapped around rolls of rice and raw tuna) with hot saki while pouring through our pocket travel books.

Our waitress brought second servings of saki in two blue porcelain bottles and pointed to the elderly gentlemen at the next table. I hesitated. What might these proper-looking men be expecting in return for their generosity?

But I didn’t want to seem rude. We nodded and said, “Arigato gozamasu.“

Before the men could make further advances, Ali waved her Fodor’s under my nose. “Look at all these discos! We could walk to most of them!”

Winding through crowded, neon-lit streets, we found ourselves in a basement night spot. Recorded music blasted from speakers on the wall and a film of topless Caucasian women played on a gigantic screen. Young Japanese couples watched sedately as they sipped from tumblers of what looked more like a dessert than a drink. The screen flickered; the picture changed.

Later as I watched nightmare scenes on CNN, with tsunami waves washing over villages and survivors limping over heaps of crumpled houses and thousands fleeing radiation danger zones near the nuclear plants, I wished I remembered more about Japan. I must have been there (the photos prove it) but how much did I see?

I think we were all blind, the way tourists can be, peering through cameras and loitering in souvenir shops and then dashing to catch up with an impatient guide.

But, here’s the strange thing.  No one in our group was as blind as 14-year-old Laura, yet no one saw more. Lolling her head side to side like a newborn, Laura listened to the double toots of the traffic whistles, the trill of bicycle bells, the musical chimes that preceded announcements in subways and department stores, and the lilting notes of the Japanese language.

“Laura, the bus is waiting–“

This post is adapted from Whirlwind tourists find they’re not in Kansas anymore by Jackie Craven, previously published in the Providence Sunday Journal and other newspapers. Several names and identifying features have been changed. Inquire about  reprint rights.

The Tao of Taos